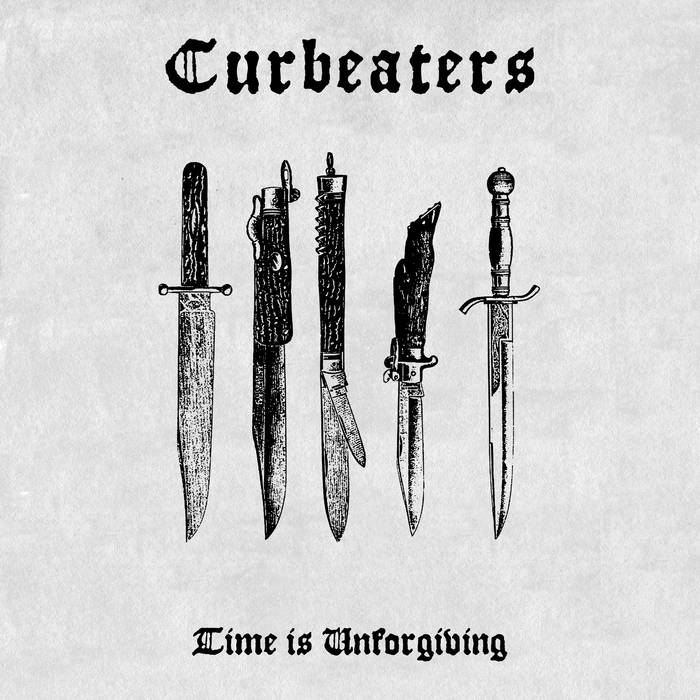 FDJ Are these guys Cur-beaters or Curb -eaters? I know not, but I do know they kick some seriously good ass! Favorite track: Code Of Faults.

CURBEATERS are/were kind of like the father you never saw and didn't know was there, but suddenly he knocks at your door. At least that's kind of like the case to well-known German acts BLACK SHAPE OF NEXUS, IRA, PLANKS and ULTHA.

The history:
In 2002 all members of the project spent a lot of time on a German message board for underground DIY punk/hardcore/metal and they mutually knew each other from shows and festivals. Several ideas for projects were founded by memebrs of that board – non ever really gave birth to a record. Tom, Andy and Geb met for one weekend to praticse and record a few ideas. Ralph was supposed to play bass but couldn't make it to that weekend. So the remaining members recorded the three tracks on this very record. There was never another proper rehearsal or plans to commence the band, but the instrumental tracks made their way through various channels and always got great feedback. The originally intended singer never made it to record vocals, so the whole thing just kind of faded to a distant memory and all members went on to play in some of the most well-known acts in German DIY metal/doom.

Fast forward to 2016: Andy and Ralph both ended up in Cologne, playing together in a black metal band called Ultha. Andy is a professional recording enginieer and always kept up hope to actually finish the songs at some point. After an intital push by Timo (Golden Antenna) a few years back to have Ralph record the vocals, the idea popped back up in 2016. Andy just opened his Goblin Sound Studio and Ralph is fairly well known for his trademark lyrics and vocal performance in now defunct Golden Antenna Records act Planks. Ralph wrote some lyrics and tried out the vocals – it turned out to be a perfect match for the three doom laden sludgy rock songs.

Now hell froze over and Andy's persistance paid off: 'Time Is Unforgiving', a three song EP and the result of more than 15 years in the making. Limited to 300 records on vinyl distributed by the label which played a major part in why this thing came together after all these years.

Thanks to all people involved with making this record possible and for your patience. It only took us 14 years to finish. A special salute to Timo Siems, Markus Aschenbrenner, Thomas Reitmayer and Pat Trieb. Regards to Shipping Nails- how is your record coming along?